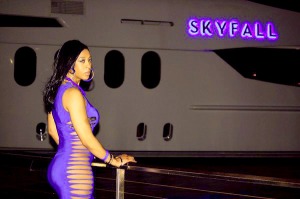 What’s new in the HipHop/Rap World??? Ok, it’s about 50 Shades of “Fuck” by Lady Crush. Close your ears if you’re under 18 years old, this post is not for you.

Lady Crush arrives on the scene with a movement that electrifies the waves of listeners thirsty for a taste of electronic hip hop sounds. Visit the website at http://www.ladycrush.com for announcements and bookings.

Here’s one of the latest snippets posted on YouTube:

So you want to hang-out with Lady Crush on the Social Networks….Here are the links!

The youngest of the female pioneer solo emcees, Camden, NJ native Lady Crush (Rochelle Ryndia Ray) officially started her hip-hop/electronic career in early 1984 with a guest rap appearance on Tim Greene’s “Facts of Life” (Sugarscoop). The late famed producer/re-mixer Raul A. Rodriquez (ABBA, Man Parrish, Gil Scott-Heron) then remixed FOL at Todd Rundgren’s Secret Sound studio (NYC), creating the “The Dub of Life” added on to the re-release. Because of rave reviews individually of Lady Crush’s verse on the song, she was encouraged to quickly return with a solo follow up record, which she did when she dropped “MC Perpetrators” (KAM Records) at the end of the same year.

As Lady Crush began receiving national and international play on hip-hop friendly radio stations /underground clubs in the US and UK, she began performing on many teen dance shows, such as the original Dancin USA/Dancin’ on Air. Too young to tour in many venues on the very new rap circuit as a preteen- proved initially to be a challenge for Lady Crush. But sounding older on air coupled with her maturity level, she was soon able to bypass red tape and open on tours for Heavy D & The Boyz, UTFO and then later others in hip-hop and R&B such as Salt-N-Pepa, Club Nouveau, Timex Social Club and The System.

Still today in 2016, Lady Crush’s name is legendary and“MC Perpetrators” is an electronic hip-hop classic considered to be a rare 12”, with online pricing recorded as high as US $610

Lady Crush returns all grown-up as the sexy, sensual “Super Vixen of Queen Empire” to visit her previous and new releases in celebration of her 30+ Years in the hip-hop industry.

Visit the site for more info at www.ladycrush.com